This Christmas my mother-in-law gave me a Cuisinart “Smart Stick,” which is an immersion blender, whisk, and chopper.  I decided to try it out tonight by making potato soup.  I didn’t go by a recipe, but I did use a few guidelines that my mother-in-law told me.  She is the most amazing chef!  I’m sad that we were too full to eat dessert after Christmas Eve dinner, which was chocolate mousse, with mint crème anglaise and a chocolate butterfly!  She’s going to keep it cold for us for the next time we visit, and I’m very excited.

I bought a bag of Yukon Gold potatoes, because I think they are the prettiest potatoes, but you can use whatever you please.  I also kept the skins on (All the vitamins are in the skin, right?  Or is that just something moms say to make you eat all your vegetables?).  Chop up about half of the bag in similar-sized pieces, then cover the potatoes with water.  Bring them to a boil, and when they are fork-tender, turn off the heat.

While the potatoes are boiling, chop an onion and begin rendering some bacon.  After the bacon is done, remove it with a slotted spoon and keep to top the bowl of soup!  Add 2 tablespoons of butter to the bacon fat, and when the butter is melted, add the chopped onion.  I added 2 chopped celery stalks, just because I had them in the refrigerator. 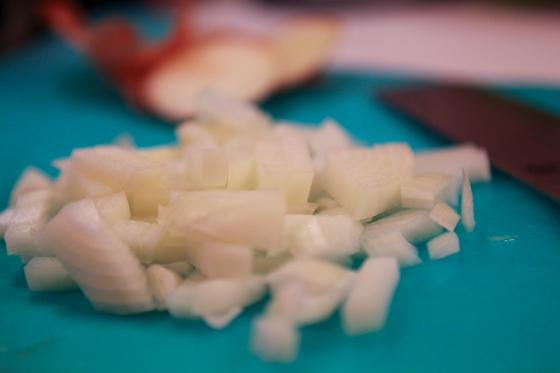 onion and celery, sauteeing in the bacon fat and butter

After the onion and celery are soft, add the potatoes, about 1/2 cup of heavy cream, and 2 tablespoons of butter.  I also added some of the potato water to make sure it would be liquid enough to use the immersion blender. 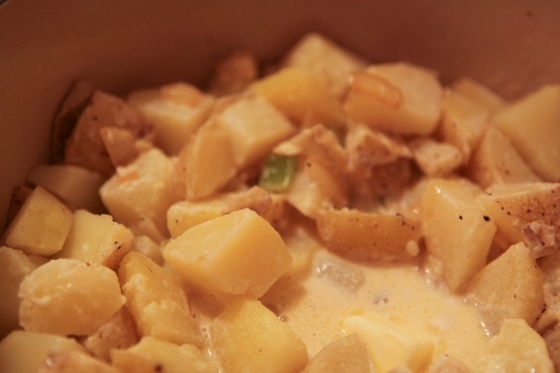 almost ready to be blended to bits!

And now, the immersion blender!

Since it was still a little thick, I added a little more cream (maybe 1/4 cup).  I also boiled 2 bullion cubes in the remaining potato water (about 2 cups) and added it to the pot.  I would have added some chicken stock if I had had some in the pantry.  Alas…  I continued to blend using the blender because it was fun.

pretty good consistency, if I do say so myself

Now, the plating.  I have these beautiful plates from Villeroy & Boch.  The pattern is New Wave Acapulco, and I absolutely love it!  Aren’t they fabulous? 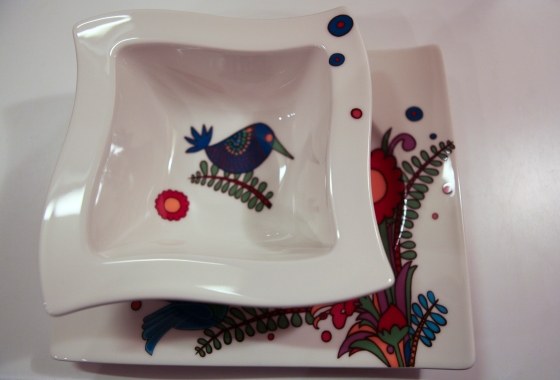 Here is the potato soup.  It’s such a filling dinner, along with some toasted multi-grain baguette slices that I picked up from Kroger.  Yum. 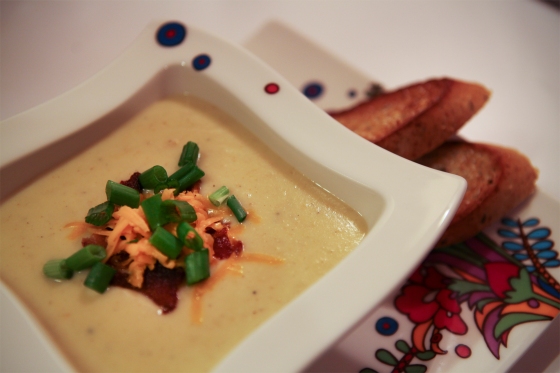 Also, my husband toasted, buttered, and salted the bread.  He didn’t think the photo above really showcased his handiwork.  So here is the bread, close-up. 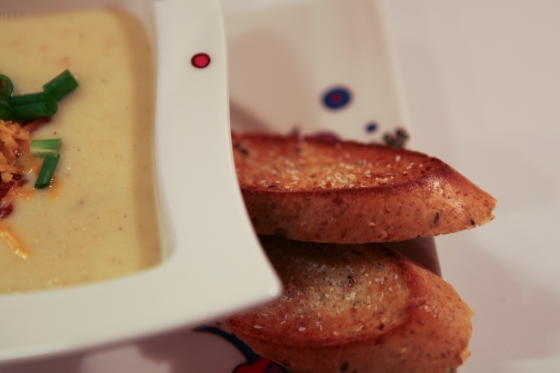 One thought on “Potato Soup – Trying out the new Cuisinart immersion blender!”