Today I plan to start recovering some bar chairs that I love!  That will be a separate post, hopefully later today when I finish them.  I’m also working on a knitted hat that will most likely NOT be finished today.  I’ve been working on it for about a week, but I haven’t had time to really sit and knit.  I usually just pick it up if I’m sitting on the couch and knit a round or two.  It also got off to a bad start because knitting in the round is new to me, and I had a lot of trouble starting the project.  I cast on 110 stitches 3 times!  I had also knitted about 1.5 inches of the hat when I realized that I was doing one of the stitches wrong, and it wasn’t going to look right or be fixable.  Ugh.  My fingers seriously hurt after that little problem.

The hat I’m working on is Grumperina‘s Odessa Hat.  The pattern is available as a free Ravelry download!  I omitted the beads because I didn’t want to add another complication (especially with the rocky start I had).  Here is the work in progress: 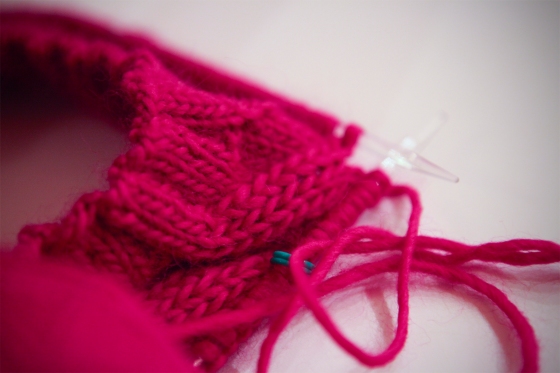 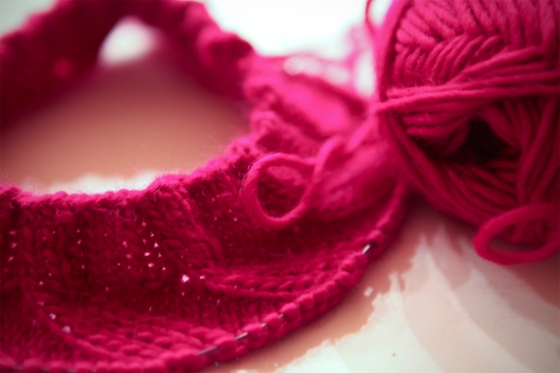 The yarn I’m using is Debbie Stoller’s Stitch Nation Full o’ Sheep yarn in Passionfruit.  The yarn is 100% Peruvian wool, and it is the first time I’ve ever used wool (I usually stick to cotton or bamboo).  I love Debbie Stoller!  Her book, Stitch ‘N Bitch, taught me so much when I was learning how to knit.  In fact, her book, a kit from Wal-Mart, and You Tube was all I needed to get started.  But, I’ll admit I haven’t finished anything big, like a sweater or blanket.  At some point I will make an Icelandic sweater, though, as I said in a previous post! 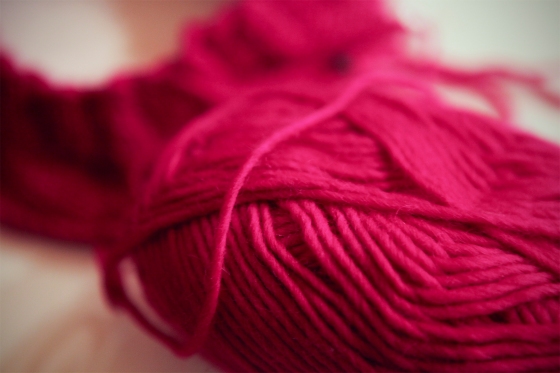