I have very fond memories of the Chinese New Year that I spent in China.  We spent three weeks in Yunnan Province, which is the most amazing area of China, at least of the places I’ve been.  Yunnan borders the countries of Vietnam, Laos, and Burma, and the provinces of Sichuan and Tibet.  Thus, there is high ethnic diversity in Yunnan, and throughout the province you can distinguish the ethnic minorities by the traditional dress that is still worn today.

We visited Kunming, Lijiang, Dali, and all places in between.  We stayed with a family in a village outside of Kunming and spent the actual Chinese New Year shooting fireworks with the local kids, although the fireworks continued for the next few weeks in celebration.  We were fed wonderful food, saw a Naxi performance, swam in the Yangzi River at the Tiger Leaping Gorge (looking back, that was pretty stupid), and paddled across Lugu Lake.  I took these photos with my beloved Rolleiflex while in Yunnan.

these guys were taking a break so we stopped too

On one of the last days of my Chinese class, Li laoshi taught us to make jiaozi (dumplings).  Yes, I still say jiaozi, mainly because it’s fun to say, and it annoys my husband.  Li laoshi scared me to death!  She was such a drill master, but when we made jiaozi that day, she was the sweetest person in the world, and I’ll always remember her.

In honor of Chinese New Year, I made jiaozi.  I’m so happy to show you how to do it!

Right outside of our dormitory, there was a restaurant called “3 Kuai Jiaozi” or something like that.  You could buy 10 jiaozi for 3 kuai, which at the time was about 30 cents.  My favorites were pork jiaozi and tomato and egg jiaozi.  That’s what I’ve made here.

First, make the fillings.  Start with Chinese or Napa cabbage and spring onions.  Anyone know what spring onions are?  I used green onions, and they tasted just fine.  Can I take a quick second to tell you how awesome Shun knives are?  They are amazing.  I have a chef’s knife and a vegetable cleaver, and if I was on a desert island, I would definitely take one of them. 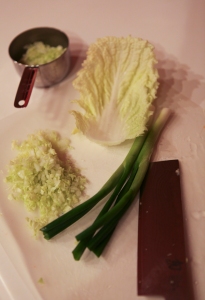 Put 1/2 cup of finely chopped cabbage and 1 teaspoon of green onion in a bowl and sprinkle 1 1/2 teaspoons of salt on top.

Then, squeeze the cabbage and onion mixture out.  Keep the water aside.  Add 1/2 cup of minced pork to the previous ginger, oil, soy sauce, and rice wine mixture, then add the veggies.  Combine everything together, adding the vegetable water as needed to get the whole thing to clump together (that’s a culinary term, “clump”).  Make sure to stir the meat in the same direction!  This is very important so it stays together once it is in the dough. 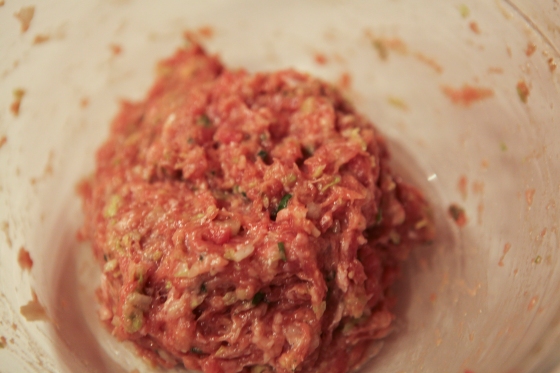 I hesitate to put up photos of meat.  I don’t like to touch it, and I don’t think it looks appetizing.  But for some reason this feels like it should be here.

Ok, next, scramble 2 eggs lightly, until they are still shiny but firm.  Add these to the tomato mixture.

Finally, we are to the dough making part.  To make 1 batch of dough, combine 1/2 cup of all purpose flour and 1/4 cup of water.  I made two batches of filling, so I doubled the recipe.  After you knead it a little, cover with a wet towel for 10 minutes. 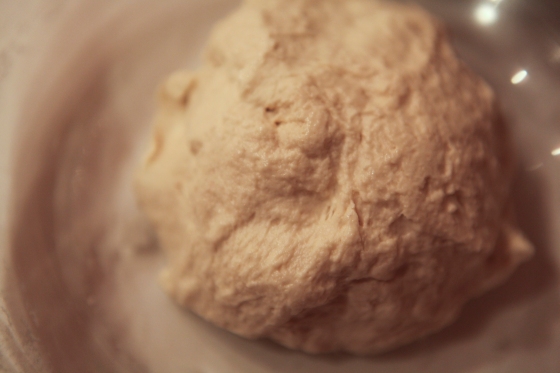 Split the dough in half if you have made 2 batches.  Roll it into a tube onto a well-floured surface, and cut it into 16 pieces. 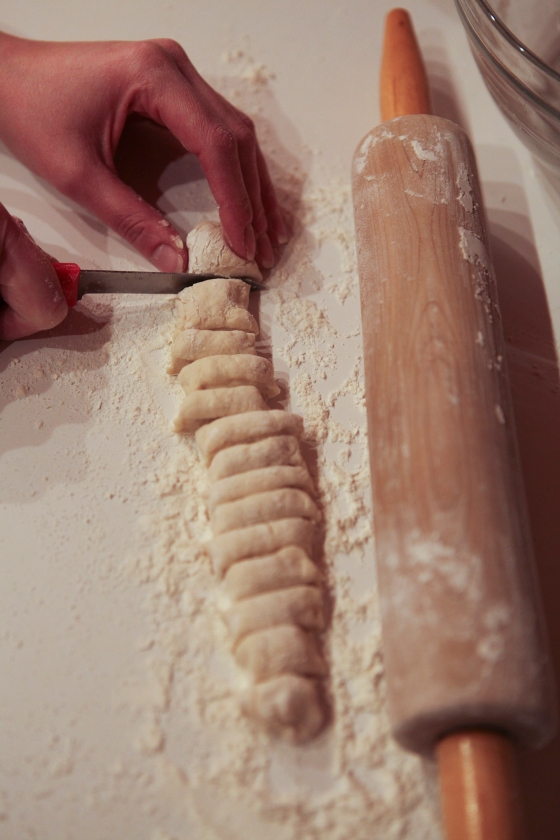 Then roll them into balls and roll out into disks. 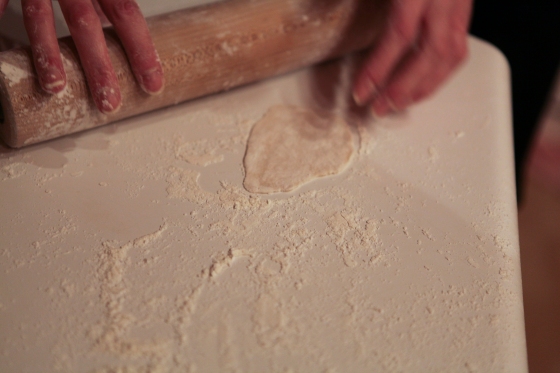 rolling out the disks

The disks will be thin.  Don’t worry if yours look like amoebas.  Mine do too.

When you’ve rolled out the dough, wet the edges and place the filling inside.  Don’t overfill it.  You really only need 1 tablespoon maximum per dumpling, depending on the size of your disk.  You’ll be able to tell if you’ve overfilled it.

Now, the hard part.  The hubs took lots of photos of me closing the dumpling.  Just follow along.

fold the edge over in the middle, don’t press hard.

start folding the edges by crimping with your fingers

continue to fold, trying to be as uniform as possible 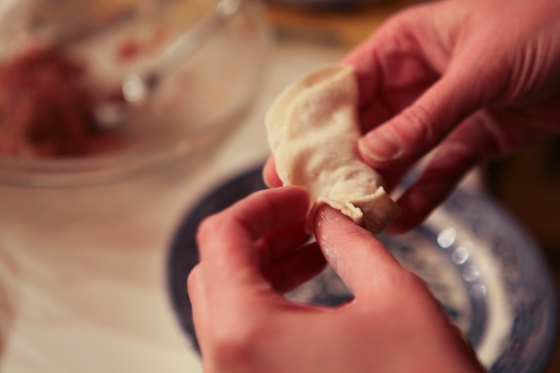 make sure to pinch hard so that they stay closed during cooking! 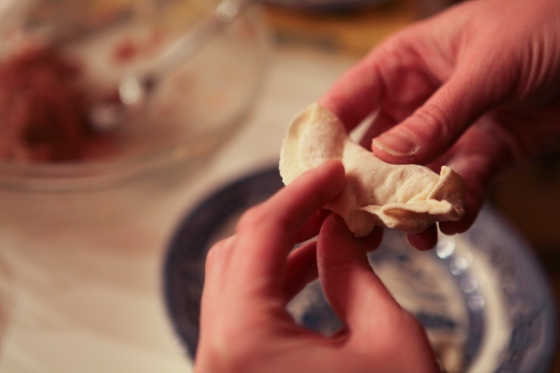 To cook the jiaozi, you can boil them, steam them, or pan fry them.  I really like them boiled, but I steamed these.  Pick your poison, and cook until translucent.  Serve with soy sauce, vinegar, and la jiao (hot stuff).