The only credit I take in the success of our garden is that I picked out the Cherokee Purple tomato plants, insisted on an eggplant, and chose Boston pickling cucumbers because I wanted to make my own pickles.  All the toil, growing, watering, and dirty hands belongs to my husband.  We originally wanted to have an organic garden, but because the heat stunted the growth of our plants early in the summer, we broke down and bought Miracle Gro.

The most successful plants so far have been the cucumbers.  I remember when I was growing up, my mom, who has a green thumb that I did not inherit, grew lots of cucumbers and made pickles all the time.  She actually canned them, with the sterilization and all.  Because I’m scared of canning (because I might kill someone – that would be my luck), I decided to make refrigerator pickles.  Well, friends, contact me if you want some.  One can only eat so many refrigerator pickles in one month.

We also have jalapenos, and because we eat lots of spicy stuff around here, I decided to mix the cucumbers and peppers in a glorious bread and butter concoction.  They are super good on burgers!

first jalapeno pepper – we were so proud!

Here are the cucumbers.  Apparently we should have harvested them before they got so big.  Oops.  My mom told me they were entirely too big.

see? they’re fairly large for pickling cucumbers, and i have really big hands

After talking to my mom, I went back outside and picked the cucumbers that were the right size.  I decided to make spears with the large ones and slices with the small ones.  And there are our jalapenos!

To make the spicy bread and butter pickles, here is what you need:

Cut the peppers and cucumbers into slices.  Place the peppers and onion slices into a bowl and sprinkle the salt over them.  Let them wait it out in the refrigerator for a few hours (4 – 6 hours).  Rinse and drain them after time has elapsed.  Bring the other ingredients to a boil on the stove and put the peppers and onions in.  Bring it back to a boil and let the peppers cook for just a couple of minutes (the color will fade, and you’ll know they’re cooked).  Turn off the heat and start layering cucumber slices and the peppers and onions into jars.  When you’ve filled up the jars, ladle the liquid into the jars.  I also take out the star anise pod, the cardamom pod, the cinnamon stick, and the cloves (just because my husband bit into a clove and wouldn’t let me hear the end of it). 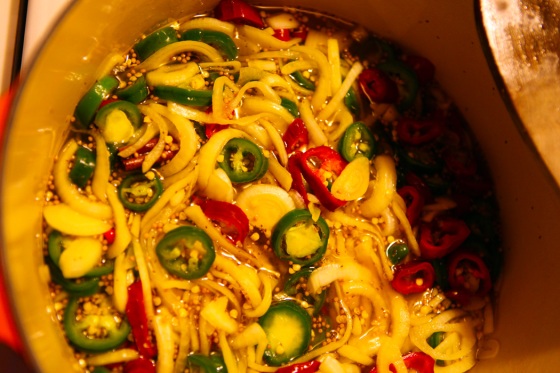 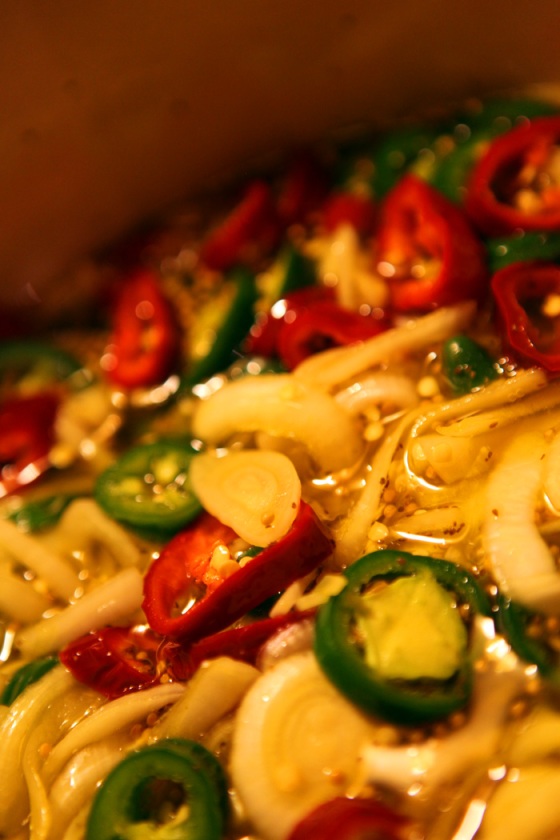 and more peppers and onions

Close up the jars and let cool.  Then store in the refrigerator for up to 1 month.

making good use of all those glass jars

I also made pickle spears using Sara Foster‘s recipe for “Mom’s ‘Fridge Pickles”.  I love these. 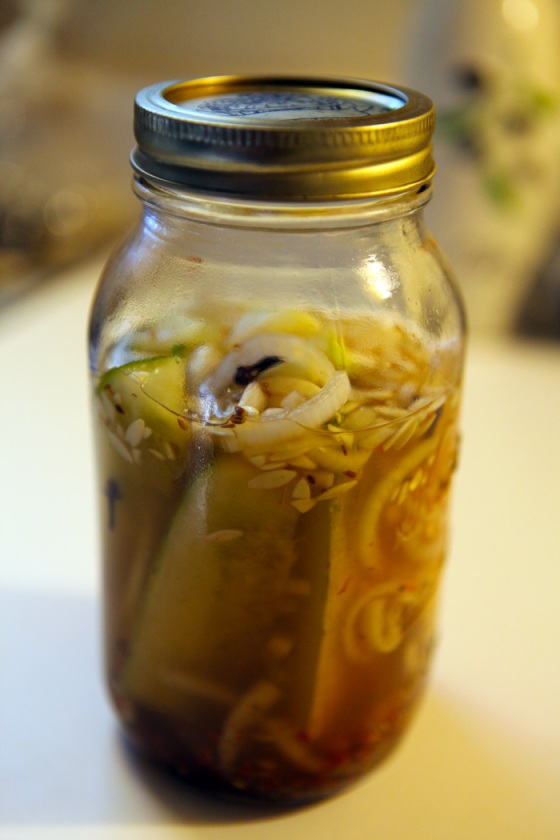 we’ve already eaten some of them…