I’m really excited to say that I was hired to shoot video last night for a promotional piece for a band.  While I don’t usually go out on football weekends, I was right in the middle of it on Friday night.  Literally.  And the icing on the cake is that the Ole Miss Rebels play the LSU Tigers tonight.  About half of the 600 capacity venue was filled with LSU fans, in their purple and gold.

Football weekends (meaning when an SEC football game is played in town) in the South are like a religion.  Of all the locations I’ve visited as a college student, the best place to enjoy the football atmosphere is the Grove in Oxford, Mississippi.  Now, I might be a little biased because I’m an Ole Miss Rebel forever and live in Oxford, Mississippi.  But the Grove is a civilized place, where you can fill up your cup with a homemade Bloody Mary mid-morning, eat fabulous hors d’oeuvres made lovingly by mothers just like your own, move on to a bourbon or two later in the day, then, if you want, you can go to the game.  Luckily, technology also allows you to watch the game in the Grove if you want, with fellow Ole Miss fans who welcome you to their tent if you know the words to “Hotty Toddy,” or even the opponents’ fans, as long as they don’t act too ostentacious when Ole Miss inevitably breaks down in the third quarter.  It really is the quintessential Southern experience, where there is more grace than crass, more manners than arguments, more sweet tea (with or without bourbon) than Coke, and more cheesy goodness than raw veggies and ranch.  BUT, when LSU comes to town, they parade their tacky purple and gold Under Armor everywhere they go, even when it’s not the actual game day.  The more elaborate fans dress as pimps with feather boas and beads, like they were dressed for Halloween in New Orleans.  The ones you have to watch out for are those who start drinking this swill:

at 8:00 am and want to fight by mid afternoon.  They also continue drinking, and whether or not LSU wins (let’s hope they do tonight, otherwise I might be in mortal danger), they will continue to drink and fight until they pass out or are taken home one way or another.

Whew, ok, rant over.  Last night, as I said, I shot video for Mustache the Band.  It was hilarious!  But being in the thick of things, without being in the same mindset of the other people who gravitate toward the stage, was pretty miserable.  Me in my flats, being stepped on by people wearing 5 inch heels who think they can dance, hurts.  And being hit in the head or camera doesn’t exactly make it easy to work.  Nevertheless, I got some great shots, and I hope it helps Mustache get some good gigs.

The point of this post is something that was bothering me last night.  I was shooting video on my Canon 5D Mark II, which has been used to shoot tv episodes and movies, but it is a DSLR, so people assumed I was taking photos.  Drunkards would ask me to take their photo, or they would pose for extended periods of time in front of the camera.  The weird thing is that they had no idea who I was or what I was doing.  Where did they think they would find these photos of themselves?  Why go to the trouble of posing?  What if I were a creep, acting official but really just taking photos of random people to use in maniacal ways?  Anyway, it was bizarre, and tonight will probably be the same.  Let’s just hope that there are some great shots to be taken.  And I’ll wear some more substantial shoes. 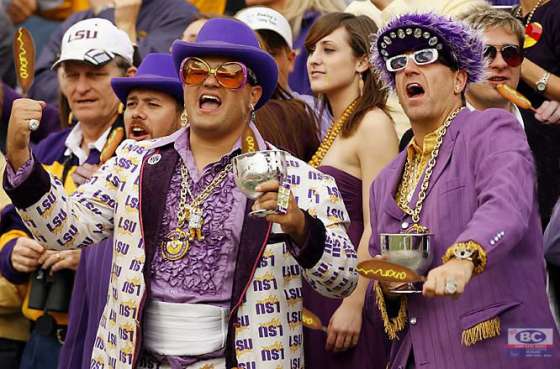 Here’s a funny post about how LSU fans smell like corn dogs, written by an Auburn fan.