I love sleeping late, especially after staying out the night before.  Happy hour turned into staying to hear the band, and this morning we were awoken before 8:00 because of some construction.  GAH!  We both feel a little guilty about the amount of alcohol we had last night.  Luckily I don’t have a hangover, but I just wasted those calories on wine, scotch, and gluten-free beer.  Yes, our favorite bar got some gluten-free beer just for us.  So sweet of them.  It’s nice living in a small town sometimes.

Today is new guitar day at our house.  Despite the unusual noise at 7:30, my husband had set his alarm for 8:00 anyway so he could be awake when his new guitar came.  It is a limited edition Jeff Tweedy signature Gibson SG in blue mist.  Very beautiful.  He’s been waiting for it for months.  So far, he says it is the most perfect Gibson he’s ever played with the intonation being spot on all the way down the neck.  He replaced the “Jeff Tweedy” truss rod cover with a “Les Paul” truss rod cover since he’s never really been “into” signature series.  He bought it because he loves SGs but thought the red and black ones were a little too edgy or something.  This one is much more him.  It’s really amazing living with someone with musical talent.  He said he was so excited because every new guitar has songs in it.  Poetic of him, really. 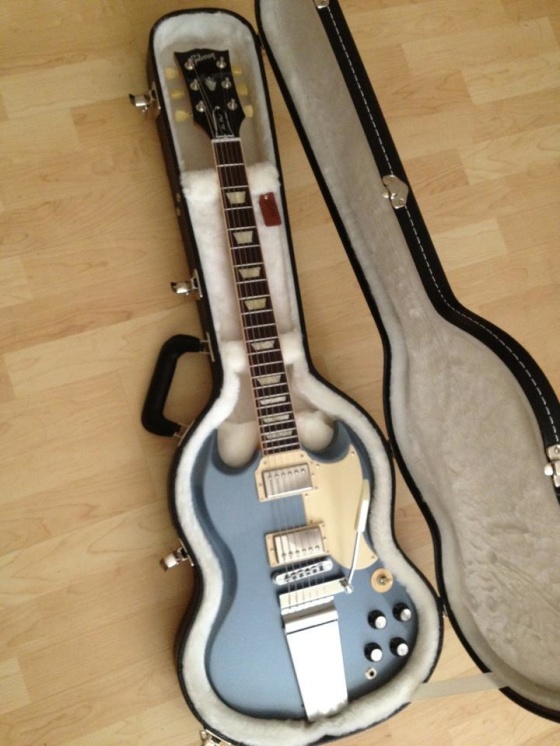 It was worth the wait.

Around 10:30, my best friend called to say they were coming through town to visit her husband’s family close by.  Her kids are the most adorable kids ever.  I don’t really like children, but if I had two of those it would be just fine.  I’ll even forgive Henry for spitting up on me this morning.  Her husband works in IT and saw my Go Pro camera on the counter, so of course he had to play with it.   Here are those two little darlings:

Yes, my house is a complete disaster.  But when best friends stop by, they never care.

So, I guess the point of this post is that today has already been awesome, despite the moral hangover we both have.  What else is in store?  Perhaps grilling out with the in-laws and taking the dogs to the park?