I made home made tomato sauce on Friday night.  I’m not sure I’ll ever do it this way again – peeling and seeding the tomatoes takes forever!  However, I did have all night by myself as the hubs was working late, so I started watching Twin Peaks and making tomato sauce and roasting spaghetti squash to make Paleo Spaghetti.  Here goes, if you want to make some.  Of course, I think you could use canned tomatoes, but with the good tomatoes that are showing up at the Farmer’s Market, I just had to try my hand at it.

4 pounds of tomatoes (they can be the little, ugly tomatoes that taste particularly good)

The time-consuming part of this whole recipe is the first part: preparing the tomatoes.

Peeling them isn’t hard, it just takes forever to do 4 pounds.  Make an “X” at the bottom of each tomato.  Bring some water to a boil and drop 1 tomato at a time into the water.  Leave it in for a few seconds, maybe 10 – 20 seconds.  Lift it out and immediately shock it in some cold water.  Use a knife to peel the skin, starting at the “X”.  They should peel fairly easily.  If not, just dunk it back in the water for a few more seconds.

After they are all peeled, slice them in quarters, or smaller, and seed them over a strainer and keep the tomato juice in a bowl.  This takes a lot of time, so bring out a good album or show to entertain you.

So, you’ve got a bowl of tomato juice and a bowl of seeded tomato quarters.  Rough chop your other vegetables and put them in a blender.

Heat up a little olive oil and put your blended veggies in to saute for a little while.  I kept mine on for about 10 – 15 minutes, stirring occasionally, while I prepared the spaghetti squash.  Preheat your oven to 350 at this point.  It should be good to go after you have finished with the squash. 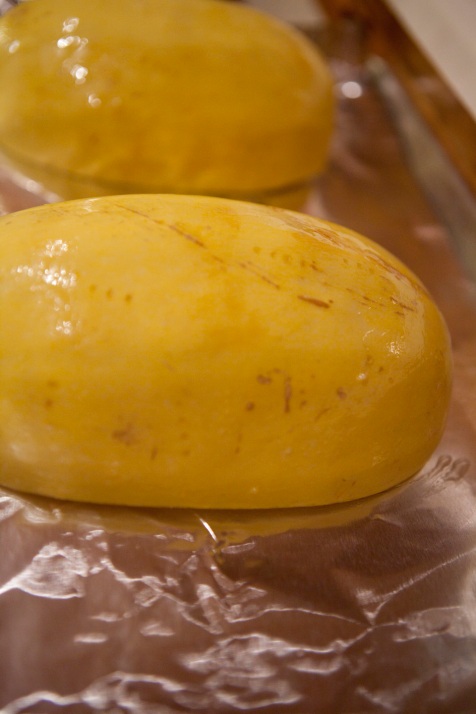 halved, seeded, and rubbed with olive oil – also, pierced with a fork

Here is the blended veggie mix in the pot:

After this sautes for several minutes, add the tomatoes to the pot.  I used a potato masher to break them up a little.  Bring to a boil, then reduce to a simmer.

Just let this sit for a while, checking on it occasionally.  About 30 minutes in, I decided I wanted it to be less chunky and used my immersion blender. 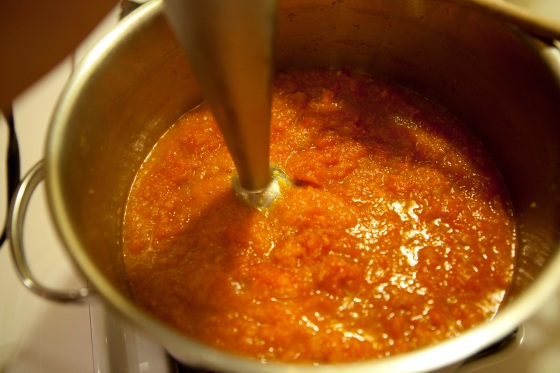 After about 45 minutes or an hour (the longer it is on, the better it gets!), taste it and see if you want to add anything else.  I couldn’t find any fresh basil, so I used this freeze-dried basil that keeps well in the fridge.  Better than dried, not as good as fresh.  Oh well.  I also added some red pepper flakes, salt, and pepper. 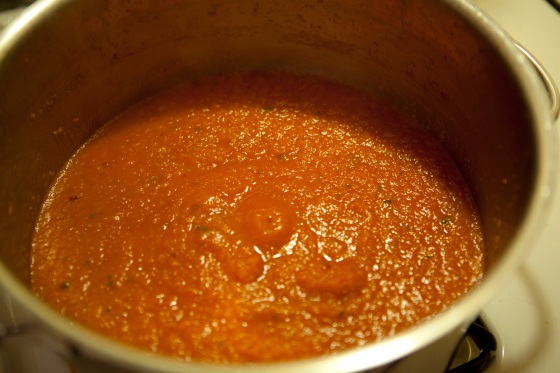 Check the squash!  It can stay about 45 minutes.  I took it out after 45 minutes and let it sit for about 15 – 20 minutes.  Also, I decided my sauce was a little thick, so I added in some of the reserved tomato juice.  It added a nice flavor.

Use a fork to scrape the spaghetti squash.  It will come out like noodles.  I just put them in a bowl to keep separate instead of adding them to the sauce like I would normally do with pasta.

I decided to saute some mushrooms to put on top.  They were already sliced and needed to be eaten. 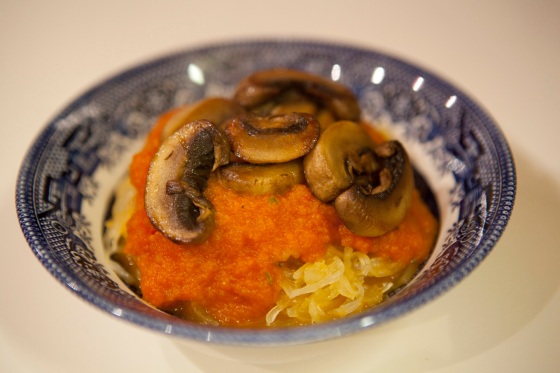 Instead of processing the vegetables, I think you could just dice the vegetables and saute them for the same amount of time.  Then, you could use an immersion blender if you think the sauce is too chunky.

Adding some red wine to the sauce when you add the tomatoes might give it a deeper flavor and darker color.  I think I may try that next time.

One thought on “Paleo Spaghetti”