I’ve been generally sticking with Paleo.  I’ve had some flubs here and there, mainly because consuming alcohol renders me helpless against sneaking an onion ring from my husband’s plate.  Alcohol = poor food choices.  Period.  Also, the hubs continues to cheat without shame.

In light of my recent inclusion of gluten, occasionally in the form of beer and one time eating bread (and one onion ring), I read Mark Sisson’s The Primal Blueprint 21 Day Total Transformation.  I like his writing style; it is very conversational and nonjudgmental.  I consistently read his emails and blog posts over on Mark’s Daily Apple as he often discusses things that come up as you transition into Paleo/Primal eating.  It really helps me to read others’ comments and his posts with references and even new blogs to read!  Being sufficiently inspired, I plan to embark on the 21 Day Transformation starting Monday (he suggests starting Monday – I’m not just procrastinating).  While I have already done several of the steps, like cleaning out my pantry, getting used to the food and lifestyle, etc., I think it will be a nice challenge and help me to continue this path.

Although I have purchased grass-fed meat before, unfortunately my budget prohibits me from buying it regularly.  Reading that he would rather eat CAFO meat rather than a piece of bread made me feel better about the choices I have to make for my household.  Luckily, my friend texted me today with news that a newer meat market in town has grass-fed beef for $4.95/lb!  Guess where I’ll be shopping from now on!  I also found his discussion of insulin resistance interesting.  As I’ve mentioned before, I often drink Diet Cokes, and this blog post does shed some light on why I should avoid Diet Coke, even if there is mixed evidence as to whether artificial sweeteners cause an insulin response.  So, new goals, to be completed within the next 3 months:

Of course there’s no discussion of smoking in the book because no sane person does it.

Even though my official challenge doesn’t start until Monday, I decided on Tuesday that after a super beer drinking/Doctor Who watching Monday that I would be strict from now on.  No more slips of onion rings.  I downloaded the Fast Paleo app and discovered riced cauliflower.  I had no idea such a thing existed.  And, to be honest, I had no idea how to do it.  I used a box grater to grate an entire head of cauliflower for two different recipes (one last night, one tonight), and it worked really well.  My husband LOVED it.  He couldn’t believe how cauliflower doesn’t taste like cauliflower when you cook it with other stuff!  Yes, he enjoyed the baked cauliflower and bacon (who wouldn’t?), but this was a nice change and substitute for rice.  He was living on rice and bean burritos before we started this, so the Mexican “Rice” recipe on Fast Paleo served a dual purpose of remembrance and satiety.

Today I stuck some chicken, spices, eggplant, etc. in the Crock Pot at lunch so we could have dinner fairly easily.  That one is growing on me.  Not sure about it yet, so I won’t post the link.  I felt like it was missing something, but it was hearty and filling, so there.  I served it with the tastiest riced cauliflower you’ve ever had!  Here is the recipe, which I adapted from this one.  (I substituted cilantro for the parsley and cooked it much longer and on higher heat.)

I heated the oil over medium heat and dumped the onion, cilantro, and garlic into a big pan and let it fry up a bit.  The onion will get translucent, the cilantro fragrant and wilted.  I then added the cauliflower and let it cook.  I wanted it to brown, so I hit the heat and kept close watch over it so it wouldn’t burn.  When I started noticing some browning, I added the red pepper flakes.  It cooked down really well and was almost like a fried rice.

Seriously, so good.  I love cilantro, and I could see this being a great side dish for Indian food or Mexican food. 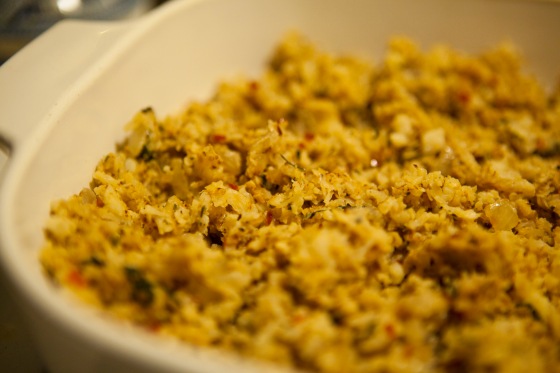