YOU HAVE TO TRY THIS RECIPE.

Yesterday I got a text from a friend who said that her husband LOVES the Mexican Cauliflower “Rice” that I found on Fast Paleo.  Her husband apparently had the same reaction to cauliflower as mine did, hating the thought of it first, then eating all the leftovers in the fridge.  She said she wanted to make shrimp and grits using cauliflower instead of grits.  The thought of shrimp and grits motivated me to peel myself from the couch and head to the store.  Luckily I had everything except green onions and lemon juice, so I decided to make them last night.  Oh holy s*it, this is a keeper.

I used City Grocery‘s recipe from the cookbook Square Table.  City Grocery is famous for its shrimp and grits, and the home version tastes just like it.  Here is the recipe with my modifications.  Just a note on dairy, there is some cheese and butter, so I guess this is more primal than paleo…

For “grits”, add grated cauliflower to a pan and add some chicken stock.  Bring to a boil, reduce to a simmer, cover.  Let cook until soft, remove the cover ,and let some of the liquid evaporate. Whisk in butter, cheddar, Parmesan, cayenne, paprika, and Tabasco. Mix thoroughly and season with salt and pepper.

For shrimp, in a skillet over medium-high heat, cook bacon until it begins to brown. Remove from heat and reserve bacon and drippings.  Heat a large skillet until very hot.  Add olive oil and 2 T reserved bacon grease.  As oils begin to smoke, toss in shrimp to cover bottom of pan.  Before stirring, season with salt and pepper.  Stir until shrimp begin to turn pink all over.  Let the pan return to its original hot temperature.  Stir in minced garlic and bacon bits. Be careful not to burn the garlic.  Toss in mushrooms and quickly coat with oil. Add lemon juice and wine.  Stir until everything is well coated, about 30 seconds.  Toss in green onions and stir about 20 seconds.  Serve over “grits”.  Serves 4.

“grits” after adding everything 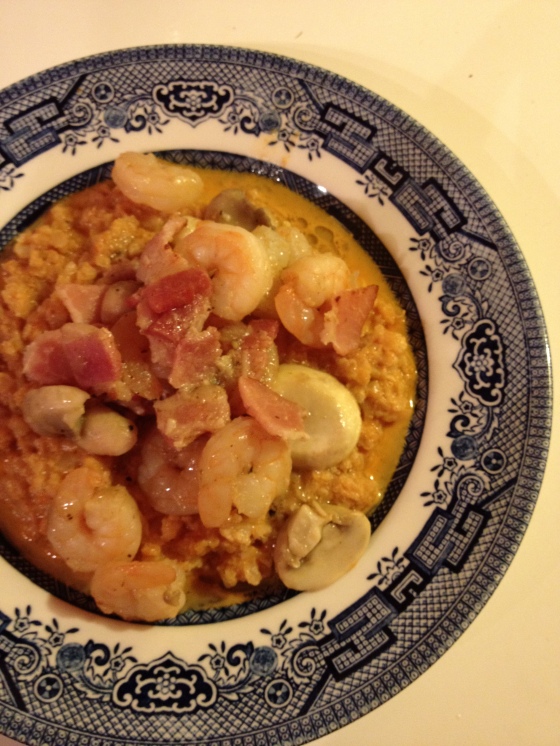 Sorry for the camera phone photos.  Also, note that my final dish does not have green onions.  There were NO green onions in Oxford after this weekend (I imagine they get bought up for toppings on Grove dips).  So, I sauteed some yellow onions with the bacon instead.  I will make this again very soon, and with green onions.