I’ve been so swamped at work that I haven’t had a chance to share whether my first attempt at menu planning was successful. Verdict: somewhat successful. In case you were wondering, here is the chart:

We ended up not eating at all on Sunday until dinner (I say that is an intermittent fast), so I still have all that sausage in the freezer (cool). When I got the thighs out to cook them, they had gone bad! OH MY GOD DEAD CHICKENS SMELL AWFUL. I had used the thighs in the curry, and they were supposed to be good for another day or two, but they weren’t. I have never had chicken go bad in my fridge. And they were the expensive kind, dammit. Oh well. We ate the Nom Nom Paleo Slow Cooker Chicken with the garlic goat cheese spaghetti squash, so all was not lost. I just lost a leftover option.

I moved the Swiss Paleo’s minute steak to Monday night (as we watched The Following – holy crap that is a freaky show and I love horror). Tuesday we had leftovers for lunch, including the spaghetti squash and minute steak, then my husband ordered half price chicken wings from Buffalo Wild Wings. He loves them. And so do I, so I didn’t freak out about varying from the menu. In fact, chicken wings might be the greatest food on the planet.

Wednesday was good, with leftovers for lunch. I made Chicken Makhani as scheduled, and we ate as planned on Thursday.

Not bad for a first try. I do want to continue to plan out our menus since it keeps us from going to the store all the time. I’ve been just incredibly busy at work because I’m leaving for ASIA on Friday and want to make sure I get everything done!

Yes, I’m headed to a conference in Hong Kong on Friday, spending a week there, and then traveling to South Korea for a week. It will be a test for me. Eating while traveling I expect to be difficult because of the nature of airport/airplane food. However, I’ve packed the following:

Eye mask, iPad, Coconut Oil, and Larabars (I know they aren’t the greatest thing to eat, but those flavors were all our store had, and these had the least carbs of all the powerbar types of stuff)

Asian food, while cooked with soy and sugar, can actually be somewhat acceptable! Meat and vegetables are a staple in Chinese and South Korean cuisine, so I don’t expect to really mess up. But, if I do, I won’t care too much because I’m in freaking Hong Kong.

Also, a fun trip to Memphis on Saturday led us to Whole Foods, where I came home with this: 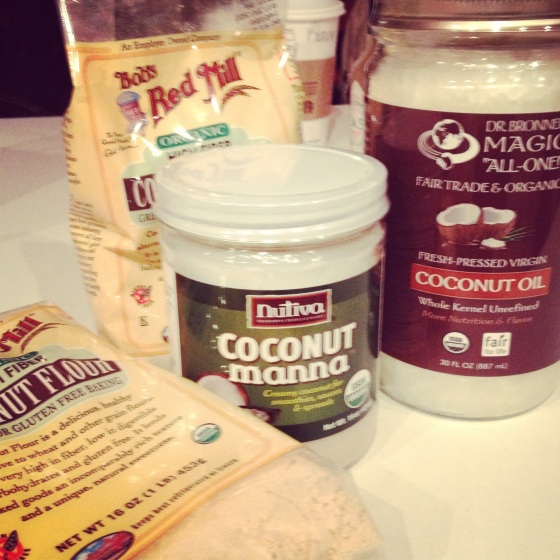 Can you believe it? I actually have these things now! I’ve started using coconut oil as my night cream. I like it, and I feel good about hydrating my skin with natural stuff. I’ll never give up using sunscreen during the day though, unless they make natural coconut oil in SPF 30. Do they?

All this talk of coconuts makes me think of one of my and my dad’s favorite movie scenes: